Superheroes Get Sad Too: How to Help Children with Disabilities Cope with Depression and Anxiety

There is nothing more inspiring than seeing a child with a disability overcome the daily challenges they face. Their determination, strength and courage are what superheroes are made of. But, even superheroes sometimes need help carrying the mental and emotional weight of living with a difficult medical diagnosis, a developmental delay, a physical disability or a learning obstacle. It’s the part of their struggle often unseen, yet profoundly impactful to them, their families and their well-being. 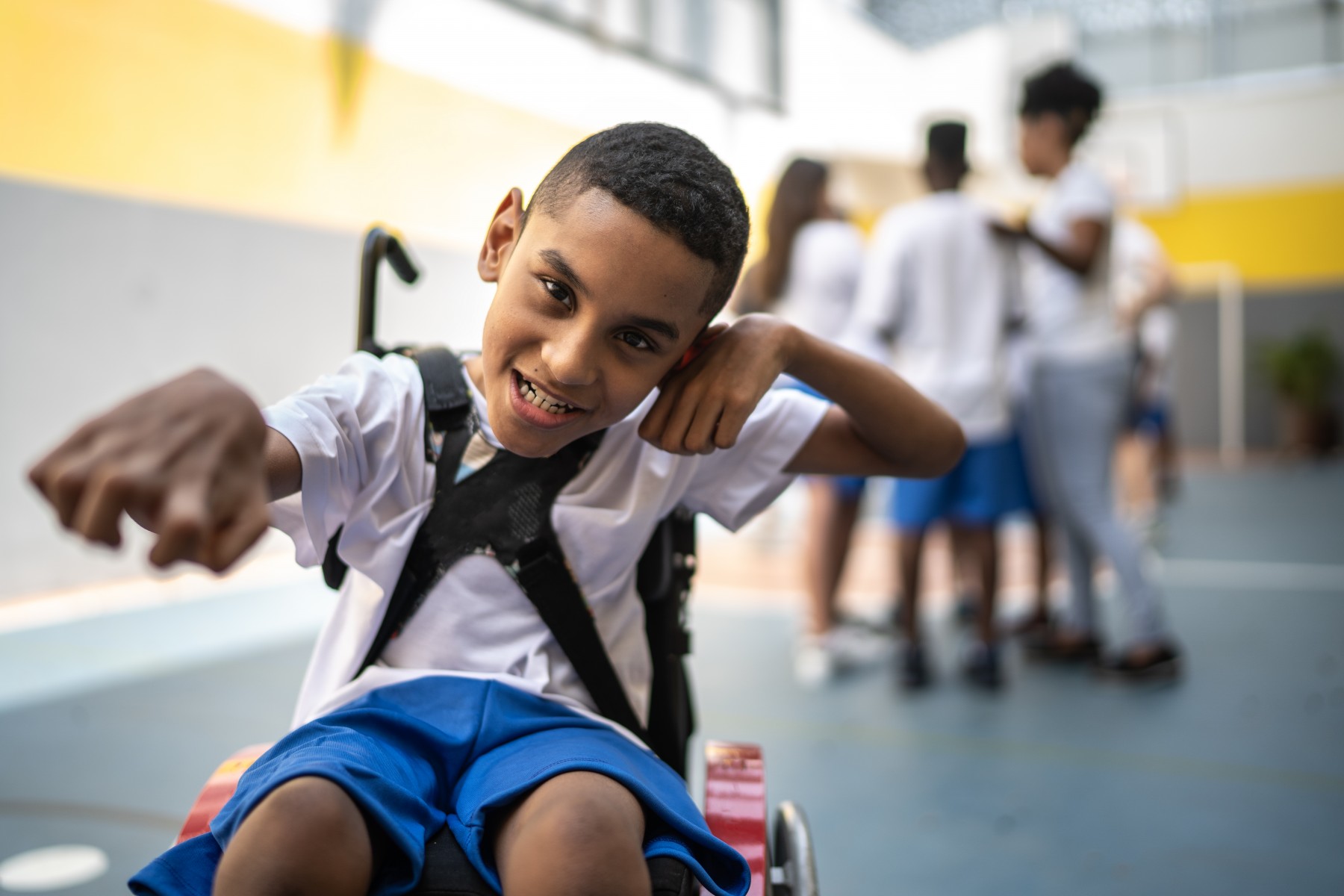 Carla Morton, Ph.D., spends a lot of time with little superheroes. She is both a neuropsychologist at Cook Children’s Jane and John Justin Neurosciences Center and the mother of a child with special needs. Morton is also an advocate for children with disabilities as a founder and current president of the Fort Worth ISD Special Education PTA.

“Kids who receive special education services are at increased risk of psychiatric issues,” Dr. Morton said. “It could be the result of a primary medical diagnosis like multiple sclerosis, for example, which in and of itself causes you to be more likely to have depression. Or, it could come through an indirect route, like attention deficit and hyperactivity disorder (ADHD), which results in more social difficulties and an inability to regulate behavior.”

No matter the cause, depression is not something to ignore. It’s a risk factor for suicide.

Studies show that adolescents with physical, developmental and learning disabilities have an increased risk of suicide compared to those without a limitation. Contributing factors may include increased stress, social isolation, discrimination, a psychiatric diagnosis and substance abuse.

Take epilepsy, for example. It’s a disorder that can be associated with physical, developmental and learning impairment.

In her role as a principal investigator, Dr. Cooper examines the relationship between neurological medical conditions and psychiatric health in order to better understand how to treat people with medical disorders of the brain. She is currently studying the impact of epilepsy on the psychological health of children.

It’s hard for a child with a physical disability to watch their friends do things their bodies won’t let them do. Constant questions from others about their limitations, burnout from intense therapies that interrupt time with their friends, and self-consciousness about their differences can erode a child’s mental health. Each of life’s developmental and social milestones they reach has the potential to present a new emotional challenge.

“Unfortunately this population has been understudied for their risk for suicide,” said Rachel Talbot, M.D., a child and adolescent psychiatrist on the medical staff at Cook Children’s Medical Center. “In general, I would say that this population is at an increased risk for depression and anxiety in addition to suicidality as they are more susceptible to the risk factors for suicide.”

Such risk factors can include having traumatic experiences—both physically and mentally—being bullied by peers, increased impulsivity, inadequate coping skills, and an inability to manage and appropriately express their feelings.

“We need to make sure that our kids with disabilities are being screened for anxiety and depression, including those with intellectual disability,” Dr. Talbot said. “We can’t overlook it.”

Impulsivity also puts children with ADHD at risk. They can quickly go from a suicidal thought to completion before anyone has a chance to intervene, according to Anne-Marie Hain, M.D., a pediatrician in the developmental pediatrics division of the Cook Children’s Child Study Center.

This year has been particularly difficult for children with special needs and their families. The pandemic complicated already stressful lives and disrupted critical therapies that help these children reach their full superhero potential. Normal daily routines were in constant flux, triggering a loss of comfort and security for children in general but especially for those with special needs.

“Regular routine and ritual is important for any child,” Dr. Hain said. “But it’s especially important for a child with a developmental disability. It allows them to understand what’s coming next, especially if there are communication issues.”

By nature of their disability, many struggle with anxiety, depression, isolation and a sense of loss on a good day. Add a pandemic on top of that and you have the makings of a perfect storm. Physicians at Cook Children’s Child Study Center, an educational haven for children with developmental disabilities, said they have seen an increase in the severity of their patients’ behavior disorders and aggression over the past year.

“At the beginning of the pandemic, a lot of children with developmental disabilities had a little bit of anxiety or a little bit of disruptive behavior or a little bit of weight problems,” Dr. Hain said. “And then the rug got pulled out from all of these families and the child couldn’t go to school or therapy. When all of that happened, a lot of little problems became big problems.”

Dr. Hain encourages parents to make sure their kids are sticking to a sleep schedule, getting regular exercise and participating in safe activities that spark joy to help boost their child’s mood in good times and bad.

How To Rescue A Superhero

Children with disabilities can never escape the reality of their circumstances, but there are ways to help them cope and soar to personal success. Christina York, Ph.D., is a licensed psychologist at Cook Children’s Behavioral Health Center. When she works with children who are struggling mentally and emotionally with a disability, she takes a page from the superhero playbook.

“Every superhero has a superpower. I encourage kids to focus on their ‘superpowers,’ which may be hidden,” Dr. York said. “Think of Superman and his adoptive parents figuring out he had superpowers as he grew up. We may discuss their ‘hidden superpowers’ that they aren’t yet aware of due to focusing on what is wrong.”

Maybe the child has a wicked sense of humor and is able to make others laugh and smile. Perhaps their circumstance gives them a keen sense of awareness of the needs of others and they are eager to help, encourage and show kindness. Does the child have an athletic, artistic, musical or creative talent that outshines their disability? Whatever the strength, the key is to help your child identify it, own it and use it to reframe their focus on what they can do rather than what they can’t. Show them they are more than their disability.

“Finding either character strengths or other areas of functioning where they feel confident can help buffer the effects of their disability,” said Amanda Smith, Ph.D., a licensed psychologist at Cook Children’s Behavioral Health Center.

Dr. Smith encourages her patients to research and learn about well-known people with similar challenges, as well as connect with other kids with disabilities, in order to see life’s possibilities and develop a circle of support.

Age-appropriate explanations about their diagnosis help kids better understand and cope with their circumstances. Telling a child too much or too little, or getting too technical, may lead them to think the worst, Dr. York said. Once you and your child have a good grasp on the diagnosis or disorder, consider sharing it with those in your circle.

“I think the most important thing is having the correct knowledge,” Dr. York said. “Then we walk kids through choosing who and what they want to tell about their disability. We can go into the school and tell school staff so that they’re aware and can provide support. In some cases the school counselor goes into the classroom to talk to a child’s peers about their disability so they have a better understanding of what is going on and aren’t constantly asking the child ‘what’s wrong with you.’ Some kids may not want to tell anyone and feel isolated. They may benefit from discussing why they don’t want to tell anyone and how they might tell trusted people about the diagnosis, including good friends, if they change their minds.”

There are so many things children with disabilities cannot control about their bodies and lives. Where they can have a say, they should.

“Let them have a voice because it feels like their body is constantly at war with them,” Dr. York said.

Listen to what they are saying they need and work with their medical team to safely adjust care and therapies to achieve a balance for physical, mental and emotional health. A short break from therapy or a restructure of their therapy schedule may be all they need.

When a child’s disability can’t be seen, like in the case of a learning difficulty or chronic illness, it’s easy to mislabel them as lazy or having a behavior issue. This can open the door to feelings of frustration, failure, rejection and isolation. Protect against these hurtful labels by informing your child’s school and teachers about their challenges. Help your child understand the strengths and weaknesses associated and not associated with their disability and teach them how to advocate for themselves, according to Dr. York.

Most importantly, if you think your child is struggling, don’t wait to get help. It never hurts to talk to someone, even with the most basic concern. Intervening early can be a buffer to more serious issues, including suicide.